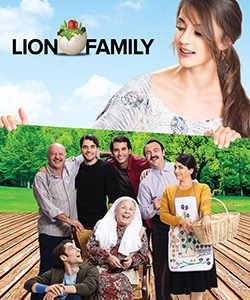 Synopsis
Lion Family is a family consisting of seven family members. Vedat (Hakan Salinmis) has been living together with his mother Hayriye (Zerrin Sumer), his wife Hatice (Benian Donmez) and his four sons in Lion Ranch for 30 years. Vedat is a farmer while his wife Hatice is a housewife who is also working in the Ranch through raising chickens and growing vegetables.

Lion Family lives happily all together in the Lion Ranch.

The eldest son Gayret (Ferdi Sancar) works as a radiologist who is a cleaning addict. Due to his picky personality, he cannot manage to have a girlfriend and all his dating attempts fail.