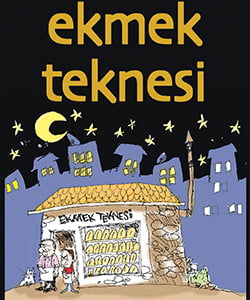 Nusret (Savas Dincel) is a baker who owns a bakery shop named as Boat of Bread (Ekmek Teknesi) in a small neighborhood. He gets up too early each day to cook bread. The locals in the neighborhood have been buying bread from this bakery shop for 100 years.

Nusret lives happily with her wife and five daughters. Each girl has her own problem.

Mehbare (Mehtap Bayri) is the biggest daughter who wants to get married soon. She is good at domestic responsibilities and wants to have her own family as soon as possible.

Jale (Esin Civangil) is the second largest daughter who cares about her beauty. She has a boyfriend named Korkut (Cem Kilic). Jale and Korkut love each other very much but they fight like cats and dogs all the time.

Sonay (Melike Guner) is very understanding and mature. She is fond of books and cares about her father.

Songul (Ekin Turkmen) is interested in television, computer, and phone.

Each craftmen in the neighborhood have their own tragicomic story but their only common point is the thing that they live together.

Bread and Butter (Ekmek Teknesi) tv series story is about baker Nusret, his wife, his five daughters and brother-in-law. Will Nusret keep his family together despite all the problems and obstacles? Will Mehbare manage to find her prince-charming and get married soon? Will Jale start to get along with his boyfriend?