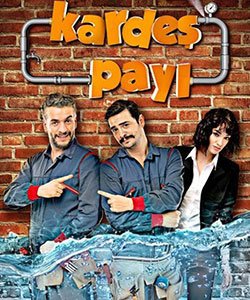 To prove their talent to their crazy scientist father; Metin and Ali try to invent something that would make the world a better place. They decide to make a revolutionary motor that work with boron instead of gasoline. They work so hard at the back of their plumbing company when they are free. Nobody believes that they would eventually succeed but they manage to fulfill their goal.

Not only the life of two brothers but also the life of the neighborhood change when the revolutionary motor works. While they are dreaming to bring peace and happiness, they need to overcome so many obstacles.

In equal share (kardes payi – brotherhood) tv series story, you will explore the absurdist comedy revolving around Metin, Ali, Feyyza. Will Metin and Ali manage to bring peace and happiness? Will Feyyza eventually disclose her platonic love? Will Ali manage to gain the trust of his ex-wife? What will happen to the neighborhood residents after revolutionary motor?