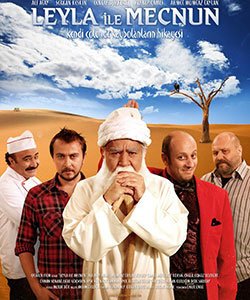 It is a surreal, absurdist comedy revolving around the poetic love story of Layla and Majnun.

After their first encounter, Mecnun starts to see Leyla not only in his dreams but also everywhere in the daytime. He even meets a wise old man (Koksal Engur) in his dream and starts to get his advice in order to attract Leyla. During this journay, his friend Ismail (Serkan Keskin), grocery store owner of the neighborhood Erdal (Cengiz Bozkurt) and the thief of the neighborhood (Osman Sonant) accompany Mecnun.

In leyla and mecnun tv series story, you will explore the poetic love story of Leyla and Mecnun in an absurd way. Will Mecnun manage to attract Leyla at the end?