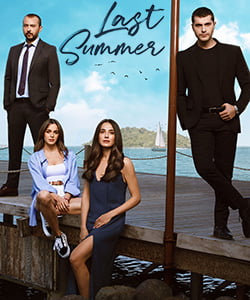 Selim (Ali Atay) is an idealist prosecutor who is married and has two children. He dedicates all his time to his work, lives in Istanbul apart from his family, and neglects his family most of the time.

Akgun is a reckless and fearless guy who is 20 years old. He has grown up in a dangerous environment due to his father’s mafia relations. Even though his father has been in prison for 8 years, Akgun still uses his father’s name in this dark world.

Akgun cannot accept easily that his father would become a witness. He knows that neither he nor his father can survive if people learn that Selcuk Taskin is a witness.

Meanwhile, Selim learns that his wife Canan (Funda Eryigit) wants to get a divorce. He cannot communicate with his wife on phone and for this reason, he decides to go to Izmir in order to persuade his wife.

Selim has nothing to do but to go to Izmir together with Akgun. Selim and Akgun do not get along with each other but start a journey together. When they arrive at Izmir, Selim does not reveal Akgun’s identity. They rent a house next to Selim’s family house and decide to stay there until Selim persuade his wife.

The arrival of Selim and Akgun changes everything all of a sudden. However, Selim’s wife Canan is determined not to take steps backward.

Canan has been married to Selim for 18 years and has two children. Her daughter Yagmur (Hafsanur Sancaktutan) is 18 years old while her son Altay is 15 years old.

Even though Canan studied law in Istanbul together with Selim, she has not been working for 18 years. When she got pregnant at her fourth year in the university, she had to get married to Selim and dedicate her life to her family.

Canan cannot stand her husband’s neglect anymore. She becomes determined to get a divorce and start a new life as a lawyer. Her daughter Yagmur also supports her mother’s decision. She also cannot accept the fact that her father neglects them.

The arrival of Selim and Akgun upsets the balances in Izmir. While Selim tries his best to gain his wife’s trust, Akgun comes across to Yagmur in different occasions.

Last summer (son yaz) tv series story is about a reckless and fearless young guy Akgun who comes to Izmir together with his custodian. Will Akgun manage to escape from the prosecutor Selim’s guardianship? Will Selim manage to persuade his wife and prevent her to get a divorce? Will Akgun get along with Yagmur? Will Akgun get used to living in Izmir?