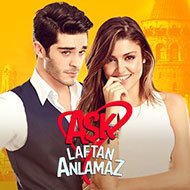 In this story, you will explore a romantic comedy between two different characters. What will happen when Murat learns the true identity of Hayat? Will Murat and Hayat manage to live happily ever after?