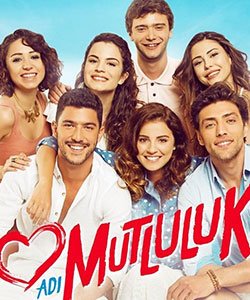 When her father does not approve her decision, Kumsal finds herself in a desperate situation. Meanwhile, she bumps into Batu (Kaan Yildirim) who is a handsome and carefree guy.

Batu also gets acceptance from a university in Istanbul but he says that he would not be able to go to Istanbul due to lack of money. These two young persons decide to find happiness no matter how hard it is and they decide to run away to Istanbul together.

On their way, Batu has to leave Kumsal behind without saying anything because he has to get rid of the men who follow him. Since Kumsal does not know what is going on, she just assumes that she has been swindled by Batu.

Soon after, Kumsal bumps into Batu in Istanbul again. Troubles arise as they realize the differences between money and the real world and they soon learn what love is.

In happiness (adi mutluluk – its name is happiness) tv series story, you will explore the lives of young people who seek for happiness. Will Kumsal learn why Batu has left her behind? Will Kumsal and Batu find happiness in Istanbul? Will Batu manage to solve problems in his life?