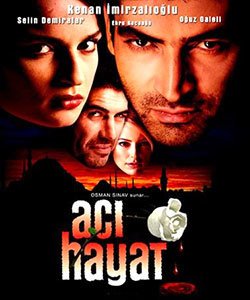 Mehmet (Kenan Imirzalioglu) is a poor guy who is desperately in love with Nermin (Selin Demiratar), from his neighborhood. He works as a welder in a shipyard while Nermin is a manicurist in one of the well known coiffeurs. Their only aim is to get married and have a nice home. Thus, they try to get rid of poverty by working harder each day.

Nermin starts to get closer to the glamorous life of Ender and edges away from the love of her life; Mehmet. She leaves her old poor life and her only real love behind and starts a new life in richness with Ender.

On the other hand, Mehmet becomes very devastated when Nermin leaves him for another man. He promises to seek revenge on the man who steals his girlfriend. Therefore, Mehmet tries to woo Filiz (Ebru Kocaaga) who is the sister of Ender. Although he still loves Nermin, he tries to camouflage his feelings and keep concretely practicing his revenge.

In bitter life (aci hayat) tv series story, you will explore a tragic love story of Mehmet and Nermin. Will revenge fill the emptiness in Mehmet’s hearth? Will Mehmet go back to her first love or stay with Filiz? Will Mehmet forgive Nermin and live the rest of his life peacefully with her?