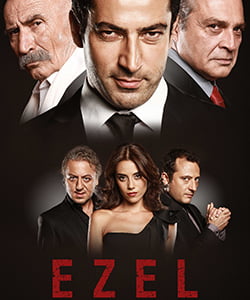 Omer (Ismail Filiz) works as a motor mechanic and has a comfortable lower middle-class life. He totally trusts his best friends, Ali (Baris Falay) and Cengiz (Yigit Ozsener). When he meets Eysan (Cansu Dere), he falls in love with her. After returning from military duty, he proposes to Eysan. However, the day after he proposes to Eysan, he is blamed for robbery and murder, while his friends Ali, Cengiz and his love Eysan gets away with millions of dollars ungratefully.

In Ezel tv series story, you will explore a revenge of a simple boy who becomes a rich man exceptionally skilled at gambling, reading people and fighting after the betrayal of his trusted friends and the woman he loves. Will anybody recognize that Ezel is actually Omer in disguise? Will revenge fill the emptiness in Ezel’s hearth? Will Ezel forget about his past and live the rest of his life peacefully?

writers went brain dead on ending but was good till almost last!!!

Well, wonders never cease. After watched the finale of Ezel on youtube sans subtitles, I found out that my daughter watched the Spanish version of Ezel called Yago. It is the same story only the lead woman is more believable because she looks the right age for the part. It is essentially the Count of Monte Cristo which I didn’t realize earlier. Hope that helps.

Can you add the actor Cahit_Gök? He is so wonderful. Teşekkürler!

Ezel is a stunning show

I came across this web site while I was looking for Ezel’s episodes. I watched Ezel two times. It is the best between Turkish series, I think. I read the synopsis. So I want to correct your mistake. Ezel doesn’t mean “eternity”, I don’t know if there is a word in English, to say “ezel” but I can explain it. It means who/which doesnt have any past or history, or nonpre. I may be meant with “immemorial”. Hah by the way eternity means in Turkish, “ebed”.