I Never Give Up (Asla Vazgecmem) Tv Series 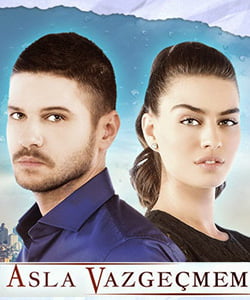 Synopsis
Yigit (Tolgahan Sayisman) is a young and rich business man who had nothing in the past but manages to become very successful with his own effort and passion. He never believes in love and never thinks that he will fall in love with someone.

Therefore, Yigit accepts to get married to his aunt’s daughter Iclal (Safak Pekdemir) even though he does not love her. After marriage, he gives all his attention to his child and puts his shoulder to the wheel.

When Yigit realizes that he cannot continue like this, he wants to get divorce. However, his wife Iclal prefers to die instead of getting divorce. While they are discussing at the car, they make an accident and Iclal enters the unfortunate condition of a persistent vegetative state.

Nur (Amine Gulse), on the other hand, is a young and beautiful girl who lives in Adana (city in the south of Turkey). When her parents pass away, she comes to Istanbul where her aunt lives.

Nur wants to find a job in Istanbul and start to live in peace by herself. She finds out that her aunt works as a maid in a big house whose owner is Yigit.

Out of pure coincidence, the lives of Yigit and Nur intersect and they fall in love with each other at first sight. However, Yigit could not reveal that he is married and his wife has been in a vegetative state for almost 3 years.

In i never give up (asla vazgecmem) tv series story, you will explore the life of a man who finds himself in the middle of two women. What will Nur do when she learns that Yigit’s wife is alive? Will Nur eventually forgive Yigit? Will Nur and Yigit manage to live together happilly?