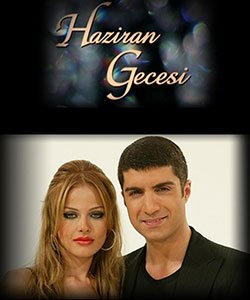 Havin (Naz Elmaz) is a 23-year old girl who goes to university. She lives with her friend but they struggle for money to pay the rent and other expenses. Therefore, Havin accepts to be hostess at a party.

Havin is hesitant but she accepts. On the other hand, Baran is told that Havin is dead. After mourning for Havin, Baran marries Duygu (Burcu Kara) who is his psychologist.

Years later, Baran has three children and he is happy with Duygu. But then, he out of pure coincidence sees Havin after so many years. Now, Havin is back but she acquaints herself as another woman, Sibel.

In night of june (haziran gecesi) tv series story, you will explore a tragic love story between Havin, Baran, and Duygu. Will Baran still continue to love Havin? How will Baran react to a girl who looks exactly like his love, Havin? Will Duygu manage to steal the hearth of Baran?