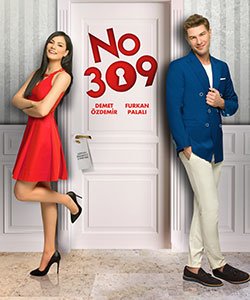 Lale (Demet Ozdemir), on the other hand, is a naive and beautiful girl who comes from an ordinary Turkish family. She works together with her mom and her sister nergis (Pelin Uluksar) at their flower shop and endures her mother’s pressure for marriage. However, she cannot forget the betrayal of her ex-boyfriend.

Out of pure coincidence, Onur and Lale meet at the same place due to a blind date that is arranged by their mothers. Onur comes to the night club in order to meet a girl whom his mother has arranged. Meanwhile, Lale comes to the same place in order to meet a guy whose name is Onur as well. Accidentally, Lale sits Onur’s table assuming that Onur is the person (a doctor) whom her mother has arranged. They become totally drunk and lose their control. They end up having a one night stand. In the morning, they find themselves at the same bed in the room number:309. They think they have not had sex and try to forget everything about that night.

3 months later, Onur gets engaged to Pelinsu (Irem Helvacioglu) even though he is not fall in love with her. Meanwhile, Lale finds out that she is pregnant. Lale is stuck in a difficult situation because she does not know anything about the father of her baby except his name. She and her family do not know what to do. Luckily, Lale sees the photo of Onur’s engagement ceremony in the newspaper and after then, learns how to reach him. Under the pressure of her mother, Lale goes to Onur’s workplace and explains that she is pregnant. However, Onur does not believe in Lale’s sincerity and thinks that she has not disclosed this pregnancy for a long time so as to have a baby from a rich family. Neither Onur nor Lale wants to get married to each other. However, their parents think the opposite.