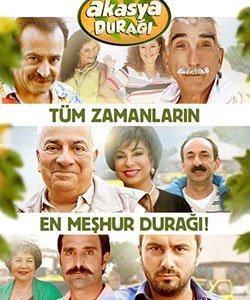 Mrs. Melahat tries to find a job with the help of her relatives and friends. Since she does not have an undergraduate degree and a foreign language, she cannot find a job. Unfortunately, she finds herself in a desperate situation again.

Nuri comes to Melahat’s rescue again. Even though taxi drivers are usually men in Turkey, he offers her a job in his taxi station. Eventually, Melahat starts to work as a driver in the taxi station that is a place full of funny, interesting and sympathetic drivers and amusement.

Driver Sinan (Levent Ulgen) is a swindler who gets into trouble all the time. For this reason, he always argues with his lovely wife Gulbin (Asli Altaylar) and his mother-in-law Saziment (Evin Esen).

Driver Osman (Cezmi Baskin) is an aggressive and ill-tempered men who comes from Thrace region. He always finds a thing to be angry at his wife Safiye (Gulay Baltaci) and his daughter Dilek (Pelin Sonmez).

Driver Seyit (Onur San) is a young man who has come from South Eastern part of Turkey to Istanbul in order to become a singer. He loves his wife Zeyno (Makbule Aybas) and tries to do his best to fulfill his aim of becoming a singer.

Ali Kemal (Ates Fatih Ucan) is a young man who comes from a Black Sea region of Turkey and works an office boy at the taxi station. He is married to Narin (Sinem Ergin) who is the dominant character in their marriage.

Driver Murat (Berk Oktay) works at the taxi station at night in order to go to medical school.

In taxi station (akasya duragi) tv series story, you will explore struggles, sadness and joy of a couple of drivers in a taxi station named Akasya Duragi. Will Melahat manage to adjust her new life as a taxi driver? Will Nuri and other drivers at Akasya Duragi work peacefully with a female taxi driver? Will Sinan manage to maintain his marriage despite her mother-in-law’s objection? Will Dilek manage to persuade her father and get married to her lover Obayana?