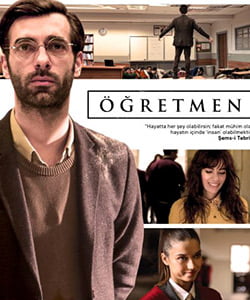 The Teacher (Ogretmen) is a Turkish adaptation from the Japanese original series “Hiiragi’s Homeroom”.

Ruya (Doga Ozum) is a promising and award-winning athlete who comes from a poor family. She is accused of using doping in the latest athletic competition. Even though she tries to prove her innocence, she cannot persuade anybody and suffers from verbal harassment both online and at school. Eventually, Ruya commits suicide with no suicide note or last words.

After this tragedy, Akif uses a different method and decides to give a humanity lesson to his students. He calls all the students from 12-A class to make an exam and then, stands in front of 29 students and tells them “from this moment, you are my hostages.” Since he is a physics teacher, he uses his knowledge to make bomb. He makes 12-A class become isolated from the rest of the school by blowing up a bomb. At the same time, in order to execute his plan successfully, Akif has already changed all the windows with unbreakable glass. Hence, students can no longer be able to go out and communicate with the outside world.

Akif asks one question to his students “Who is responsible for the death of Ruya?” Until the truth is unveiled, nobody is allowed to get free. While looking for an answer for this question, students start to face the truth about something that they have turned their backs on. As time goes, the story becomes more complicated and mysterious details about the suicide are revealed.

The Teacher (Ogretmen) tv series story is about physics teacher who takes his students as hostages to reveal the truth about the suicide case at his school. What has happened to Akif’s fiancée Zeynep? Will Akif manage to give humanity lesson to his students? Will Akif manage to reveal the truth of Ruya’s suicide? Will students get free eventually?