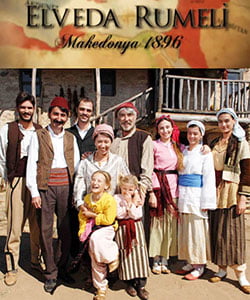 Rumeli which literally means ‘The Land of the Romans’ is the name given by Turks to the multi-cultural and multi-ethnic Balkans. The ‘Roman’ refers to in that is not the citizen of Roman Empire. It is the respectful Turkish tag given to Orthodox Christians.

Ramiz wants to live the rest of his life quietly and at peace with the world. However, ensuing events shows us that his modest wish would never come true. His eldest daughter Hatice (Gulcin Santircioglu) is in love with the county’s poor tailor Hasan (Tuna Orhan).

Middle sister Vahide (Berrak Tuzunatac) comes across Doctor Mustafa (Tolgahan Sayisman) who survives from the police raid in Istanbul and makes his way to Macedonia to hide.

In farewell rumelia (elveda rumeli) tv series story, you will explore the life of an ordinary father, a mother and five daughters while discovering the last days of Ottoman Empire. Also, in this story you will explore tragic stories of migrants that are forced to leave their country and go. How will the life of Vahide change after the arrival of Mustafa? Will the migrants from Macedonia be adapted to their new life?