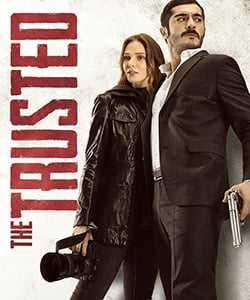 Celal (Burak Deniz) is a young man who was born in 1987 in Maras, a city in the southeastern part of Turkey. Thus, he is known as Marasli (a person from Maras).

One day, a beautiful young girl Mahur (Alina Boz) enters Marasli’s bookstore. Mahur is a successful photographer who comes from a wealthy family. She wanders around at the back streets of Istanbul in order to take photographs of ordinary lives.

After getting out of Marasli’s bookstore, Mahur goes to a deserted factory area nearby in order to take photographs. There, she involuntarily gets involved in an accident. While taking photographs, Mahur witnesses a murder. She clearly sees that a man wearing all black clothes (named Savas – Saygin Soysal) kills another man.

Mahur becomes shocked and tries to run away from the crime scene. Meanwhile, Marasli bumps into Mahur and saves her life. After this unpleasant incident, their lives intersect and they find themselves on the same boat.

Mahur and Marasli go to the police station in order to report the crime. Marasli understands that the people who have committed this crime are professionals. This is because, the crime scene is totally cleaned up and all evidences are wiped out before the police arrives at the crime scene.

After this incident, the life of Mahur becomes in danger. She is the only witness of the crime. Thus, Savas threatens her and her family in order to cover the crime.

Mahur lives in a big mansion together with her family. Her father Aziz (Kerem Atabeyoglu) is a well known businessman in Istanbul. After her mother dies due to a cancer treatment, her father gets married to a young woman Firuzan (Rojda Demirer).

Aziz tries his best in order to protect his lovely daughter. He wants to work with Marasli who has successfully saved her daughter before. Aziz wants to hire him as a bodyguard for her daughter.

At first, Marasli becomes reluctant to work as a bodyguard. Out of pure coincidence, he figures out that the logo of Aziz’s company is one of the evidences that he found at the concert hall 2 years ago. Marasli understands that there is a link between Aziz’s company and the armed attack at the concert hall. Therefore, Marasli accepts to work as a bodyguard. By this way, he could find the real culprits responsible for her daughter’s disease.

Marasli: He was born in Maras in 1987. When her daughter gets injured due to an armed attack, he leaves his position at special forces and starts to take care of her daughter. He has been working at the bookstore for two years and lives a quiet life.

Mahur: She is a beautiful photographer. She was born in Istanbul and went to prestigious schools. She comes from a wealthy family.

Savas: He is a cool and smart guy who has luxury pleasures. He always wears black clothes and suffers from xeroderma pigmentosum. Thus, he cannot be exposed to sunlight.