Details Original Title: Asmali Konak English Title: Vine Mansion Also Known As: The Mansion with Vines (English), Ivy Mansion (English), Kasr Al Hob (Arabic) Genre: Romance, Drama, Family Episodes: 54 Broadcast Network: ATV Broadcast Period: September 17, 2001 – June 16, 2003 Production Company: Ans Production Director: Cagan Irmak Screen Writer: Mahinur Ergun, Meral Okay   Synopsis A wealthy Karadag family owns vast estates in Cappadocia in Middle Turkey. After the death of the family patriarch, the oldest son Seymen (Ozcan Deniz) takes the place of his father. He starts to bear all the responsibility of the family business on his shoulders. When Seymen goes to study in New York, he meets a beautiful girl, Bahar (Nurgul Yesilcay), a daughter of a family from Istanbul. They fall in love and decide to get married. Bahar is an aspiring painter and has grown in a modern family unlike Seymen’s family. Despite the difference between their families, they get married in Seymen’s city of Nevsehir, Cappadocia. They settle in the Vine Mansion and start to live with Seymen’s mother Sumbul (Selda Alkor), brother Seyhan (Devrim Saltoglu) and two sisters. Soon, Bahar realizes that his new home is very different than hers and is astounded by the behaviors and mannerisms of the local people.

END_OF_DOCUMENT_TOKEN_TO_BE_REPLACED 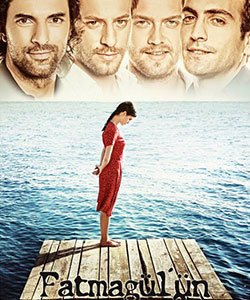 END_OF_DOCUMENT_TOKEN_TO_BE_REPLACED

Synopsis
Sahin (Yavuz Bingol) and Zerda (Ece Uslu) are two young people that deeply in love. They live in Gaziantep in the East of Turkey. Sahin comes from a traditional conservative family whereas Zerda is a daughter of an ordinary teacher and has been raised as a Westerner. Despite the difference between this couple, they plan to get married. However, their life changes radically when Sahin’s brother dies in a traffic accident. Now according to tradition; Sahin is supposed to marry his brother’s wife, Hacer (Hulya Sen). Sahin carries the burden of tradition and her mother on one shoulder and his love for Zerda on the other. Although he doesn’t want to loose Zerda, eventually he marries to Hacer but he doesn’t even touch her. He still tries almost every possible way to become together with Ece Uslu again.