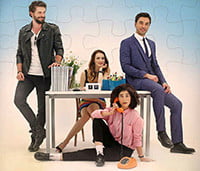 In this story, you will explore a love story that comprises four different persons instead of two. Will Yigit recognize that Deniz, who is working at his office and is not pretty at all, is his real childhood friend and first love? Will Deniz continue to be the best friend of Irem when she learns that Irem is meeting Yigit by using her name and her past? Will Irem choose his best friend Deniz or her first love Yigit? Will Deniz forget her past and start to have a new life with another man?

She Was Pretty Gallery