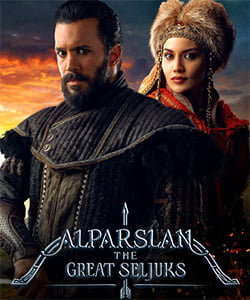 The story takes place in 1048. During that time, Anatolia (today’s Turkish lands) was under the Byzantine rule. Alparslan The Great Seljuks is a spin-off from Turkish series The Great Seljuks: Guardians of Justice.

Alparslan (Baris Arduc) is a successful warrior who is brave, fearless and determined. He takes the name of Alp Arslan (literally Heroic Lion in Turkish) thanks to his military prowess and fighting skills.

Alparslan has been raised as an orphan since his mother was murdered by Byzantine soldiers 15 years ago. Since then, he aims to take the revenge of his mother and defeat the Byzantine Empire.

Alparslan is one of the princes of the Great Seljuks (Seljuk Melik) . His father Cagri Bey (Erdinc Gulener) is the head of Merv nomad camp while his uncle Tugrul Bey (Baris Bagci) is the sultan of the Great Seljuks. His brother Suleyman (Korel Cezayirli) is also a successful warrior just like him.

When Turks are attacked by Byzantine soldiers, the sultan of the Great Seljuks orders an expedition to Anatolia.

On the other hand, the women in the Merv camp particularly Karaca Hatun (Rabia Soyturk) become suspicious of Akca Hatun. Karaca Hatun believes that Akca Hatun has many secrets and she is a traitor.

Alparslan The Great Seljuks tv series story is about Alparslan who defeats the Byzantine army in 1071 at the Battle of Manzikert and opens the doors of Anatolia to the Turks. Will Alparslan manage to open the door to new homelands for Turks? Will Alparslan find out the truth about Akca Hatun? Will Tugrul Bey make a good decision while choosing his heir?

He is 20-year-old man who is a very good warrior and a master of the archery. His father is Cagri Bey and his uncle is Tugrul Bey. He is brave, strong, determined and fearless. When he bumps into Akca Hatun, he falls in love with her at first sight. He is impressed by her beauty and innocence.

She is a beautiful Turkmen girl. Even though she is the daughter of Nizamulmulk, she has been raised by Byzantine commander Kekaumenos. She was told that her parents were murdered by the Great Seljuks and for this reason, she was encouraged to take the revenge of her parents. However, she learns the truth about her parents and starts to work for the Seljuks to destroy the Byzantine Empire.

He is Alparslan’s older brother. He is married to Karaca Hatun and tries his best to please his wife’s greed and passion. He sometimes feels jealous of his brother’s bravery. He hopes to become the heir of Tugrul Bey.

He is a Byzantine commander and the father of Yannis. Years ago, he killed Alparslan’s mother and now, he becomes one of the enemies of Alparslan.

He is a Byzantine commander.

She is the daughter of Cagri Bey and is married to Tugrul Bozar.

She is the daughter of Cagri Bey.

She is the wife of Tugrul Bey.

She is the wife of Cagri Bey.