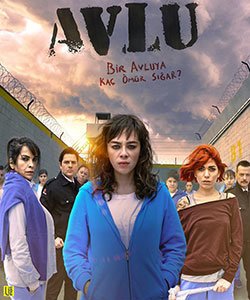 Deniz (Demet Evgar) is a beautiful and attractive middle aged woman who has been exposed to domestic violence for a long time. Her husband Hakan (Teoman Kumbaracibasi) uses alcohol and accuses his wife for preventing him to become a successful musician. Even though they have a wealthy life, Deniz does not have happiness and peace at home. She tries to be strong as much as possible and endure this violence for the sake of her only daughter Ecem (Eslem Akar).

There are two groups in the prison and each of these groups wants to hold the power. Azra (Ceren Moray) and Kudret (Nursel Kose) are the leaders of these two groups. Each prisoner chooses her side and works under the command of these groups.

In The Yard (Avlu) tv series story, you will watch Deniz’s arrival to the prison and her transition from a scared housewife to an influential prisoner. Will Deniz get used to her life in prison? Will Deniz become the member of Azra’s group or that of Kudret’s group? How long does Deniz need to stay in this prison? Will Deniz manage to protect her daughter outside the prison?

Deniz: She is a beautiful and attractive woman. While she is going to university, she meets a young musician Hakan and gets married in a short time. After giving birth to her daughter, she starts to endure domestic violence.

Azra: She has an alcoholic mother. Due to her mother’s problem, her father leaves them behind. Azra is one of the powerful prisoners in prison.

Kudret: While she is very young, she loses her father and turns the border of becoming a street walker. With her own effort, she builds her own crime gang. She is the powerful prisoner in prison. She is a very clever and strategic woman. She speaks too little but uses strong language that can hurt people easily.