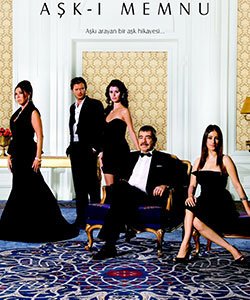 Adnan (Selcuk Yontem) lives in one of the most important shore houses in Istanbul with his two children, a relative’s son Behlul (Kivanc Tatlitug), and his children’s half-french nanny. When Adnan meets Bihter (Beren Saat), he suddenly falls in love with her.

While searching for peace, safety and happiness in Adnan’s shore house, Bihter meets passion. At the beginning, she shows no interest in Behlul who develops a crush on her. However, as time passes Behlul and Bihter fall completely into each other and become drowned by their infatuation with each other. They start having a secret and passionate affair and their secret love affair soon affects every member of the family.

In forbidden love (Ask-i Memnu) tv series story which is based on the work of the foremost Turkish author Halit Ziya Usakligil, you will explore a secret love affair full of twists and surprises. Will Bihter and Behlul start to love each other without fear, guilt and regret? Will passion and love capture the loyalty? Will betrayal shade the innocence?