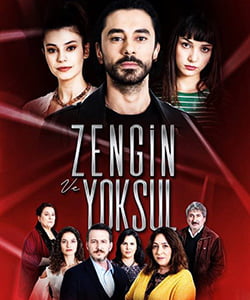 Aysel (Damla Colbay) is a young and beautiful girl who has been raised in a poor family. Since her childhood, she has endured all the hardships of poverty. She has grown up in poverty through wearing secondhand clothes of her rich cousin Aleyna (Elif Dogan) and pleasing her rich relatives in any occasion.

Aysel studies office management and graduates from the university by her own effort. Since she is sick of being seen inferior, she does not want to ask for a job from her rich relatives.

Aleyna is Aysel’s cousin who comes from a wealthy family. His father Aziz (Osman Sonant) is a successful business man who does anything to make her daughter happy. Aleyna’s mother Meral (Evrim Solmaz) and Aysel’s mother Berrin (Binnur Kaya) are cousins and live in the same neighborhood. Thus, Aysel and Aleyna have grown up together and become close friends even though they have different family backgrounds.

Aysel has no patience left for the injustice. She cannot stand the idea of being seen inferior and a second class. Due to a small misunderstanding, she makes a hard decision that would affect the lives of everybody.

Aysel is hurt due to her cousin Aleyna’s attitude. Aleyna wrongly assumes that a successful lawyer Emir (Eren Hacisalihoglu) who has been working at their company has some feelings towards Aysel. She influences Aysel’s opinion as well. However, it turns out that lawyer Emir is looking for a secretary instead of a girlfriend.

Even though Aleyna has good intentions, Aysel gets so angry and wants to hurt her cousin as well. While shedding tears due to her anger, she bumps into a mysterious guy Karan (Gokhan Alkan).

Karan is a young and handsome guy who seeks to take his father’s revenge. He has a business engineering degree and lives in London until he learns that his father has committed suicide due to Aziz Erdemli. After the death of his father, Karan returns to Istanbul in order to execute his revenge plan. He wants to see Aziz’s suicide just like his father.

Out of pure coincidence, the lives of Karan and Aysel intersect. Karan wants to get closer to Aziz’s family with the help of Aysel. He shares his revenge plan and asks for her support.

Karan aims to make Aleyna fall in love with him and eventually, leave her devastated. By this way, he aims to take his father’s revenge from Aziz Erdemli. In order to execute his plan properly, he needs an insider who can help him to know important things about Aleyna and Erdemli family.

At first, Aysel does not want to help Karan. She gets attracted by his charm but does not want to betray her cousin. However, she changes her opinion upon learning the truth about her sister Nihal (Gulcan Arslan).

Nihal is Aysel’s bigger sister who dreams to become rich as if her aunt. She has a secret love affair with Aziz Erdemli. She thinks that she would get married to Aziz and reach her goal of having a wealthy life. However, she sees Aziz’s bad personality after becoming pregnant and being left alone.

When Aysel learns that her beautiful sister is deceived and humiliated, she decides to play dirty. She wants to teach a lesson to Erdemli family.

Aysel meets Karan immediately and accepts his offer. According to their plan, Aysel would give important information about Aleyna so that Karan would easily attract her. Karan would do his best to make Aleyna fall for him. After gaining her heart, Karan would abandon Aleyna and make her devastated.

Aysel wants to see that Aleyna would want something too much but could not get it for the first time in her life. She accepts to help Karan on the condition that Karan would never fall in love with Aleyna.