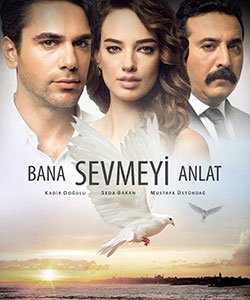 Hasmet is attracted by Leyla at first sight and introduces himself as an understanding, thoughtful, and romantic man. He wants to get married to her. Even though Leyla’s father knows that Hasmet is a dangerous man, he sacrifices his daughter in order to save his son’s life.

In the hope of making a better life for her son, Leyla accepts to get married to Hasmet without knowing his illegal activities. She comes to Istanbul in order to start her new life. However, on her wedding day, she discovers the real truth about Hasmet and understands that he is not the man who he seems. With the fear of her son’s life, Leyla runs away from her wedding and meets Alper (Kadir Dogulu) out of pure coincidence.

Alper (Kadir Dogulu) is a young man who is a successful cook of his own restaurant. He is married and has a little daughter. He does not get along well with his wife Berna (Asli Orcan) but tries to do his best to keep his family together for the sake of his daughter. Alper is deceived by his wife and his brother-in-law and loses all his savings. He tries to set all the things in order while he starts to take care of his daughter alone when his wife falls into a coma due to a car accident. In order to pay for his debt, Alper does not have any choice but to hand over his restaurant and work as an executive chef for Hasmet’s restaurant. He also does not know that Hasmet is a dangerous man and dealing with illegal activities.

The life of Leyla and Alper intersects when Leyla runs away from her wedding. They start a dangerous journey where true love is found. However, it would not be easy to live in peace while Hasmet is trying to find them.

In Wings of Love (Bana Sevmeyi Anlat) tv series story, you will watch the difficult life of Leyla who runs away from her wedding when she discovers the real truth about her potential husband. Will Leyla start to live happily apart from Hasmet? Will Alper manage to save the life of Leyla and her son? Will Alper and Leyla eventually find a true love?

Characters:
Leyla (Seda Bakan): Leyla is a beautiful single mother of a little baby boy. She comes to Istanbul in order to start her new life but runs away from her wedding when she discovers the real truth about Hasmet.

Alper (Kadir Dogulu): Alper is a successful cook of his own restaurant. He is married and has a daughter. He gets along well with his daughter and does not have a god relationship with his wife. He finds a true love when he meets Leyla.

Hasmet (Mustafa Ustundag): Hasmet is a respected and successful businessman who owns a chain of restaurants. He is in fact a ruthless drug dealer.