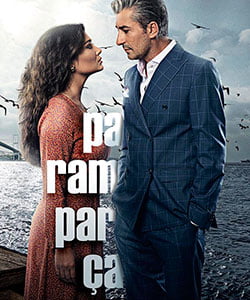 The lives of two people from different backgrounds intersect with an accident. Gulseren (Nurgul Yesilcay) who is a young and beautiful girl living in poor neighborhood of Istanbul is hit by a car and brought to a hospital to give a birth.

Meanwhile, we see that Dilara lives with her daughter Cansu (Leyla Tanlar). She has a rich life but has some problems with her husband Cihan (Erkan Petekkaya).

Another car accident brings these people together. Cansu makes a car accident and gets injured. After this accident, her parents learn that they are not the biological parents of Cansu. This fact turns the lives of all these people upside down.

In broken pieces (paramparca) tv series story, you will explore the family relations between parents and children. How will Gulseren and Dilara react when they learn that they are not the biological parents of their daughters whom they have raised for 15 years? How will Cansu react when she learns that her true mother is a poor woman? How will Hazal react when she learns that she belongs to a rich family but unfortunately, she has been raised in a poor family?