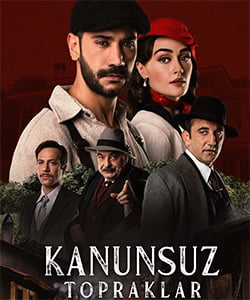 The story takes place in 1940s in Turkey.

Davut (Ugur Gunes) is a young guy who has a modest life with his siblings and his parents. He works as a worker at the coalmine together with his father and his brothers. He is fearless and cannot stand for injustice.

One day, a tragedy happens in the coalmine due to the neglect of the boss. When it rains a lot, a mine owner Malik (Murat Daltapan) does not take it seriously despite all the warnings and does not let workers to stop working at the coalmine. Miners are locked down inside the coalmine and many of them pass away when the mine collapses.

Even though the mine owner has a full responsibility for this tragedy, he threatens workers in order not to give compensation. Davut cannot stand for this injustice and decides to raise his voice against this tyranny.

Davut is determined to go to the city officials and inform them what has happened in the coalmine. On his way to the city, he bumps into Malik’s daughter Gulfem (Esra Bilgic).

Gulfem is a beautiful young girl who has grown up in a wealthy family without knowing the realities of life. She lives happily together with her father and her two sisters in a forgiving environment.

Gulfem is strong, stubborn and courageous. She rides a horse without fear and challenges the stereotypes against women. This makes her different from other girls.

Gulfem, initially, supports her father and does not understand the resistance of the workers at the coalmine. Her younger sister Fikriye (Serdem Pacal), on the other hand, reads a lot and for this reason, she does not approve her father’s attitudes towards the poor people.

At first, Gulfem strongly opposes Davut. She considers him unruly, disobedient, and rude. However, she begins to admire him as she knows more about him.

Lawless Lands (Kanunsuz Topraklar) tv series story is about an impossible love between Davut who works as a worker at the coalmine and Gulfem who is the daughter of mine owner. Will Davut kill Malik and take the revenge of his sister? Will Davut and Gulfem fall in love with each other even though they have different backgrounds? Will Davut successfully defend the rights of coal miners?

She is the daughter of Malik. She has grown up in a wealthy family without knowing the realities of life. She is beautiful, strong, stubborn and courageous.

He has a modest life with his siblings and his parents. He works at the coalmine together with his father and his brothers. He is fearless and cannot stand for injustice.

He is a rich guy who is a mine owner.

He is the lawyer of Malik. He has some feelings towards Gulfem.

He is the father of Gulfem, Behice and Fikriye. He is ruthless and only cares about his well-being.

She is Gulfem’s sister. She is silent and naïve. She secretly loves Yavuz.

She is Gulfem’s little sister. She reads a lot. Different from her sisters, she is conscious about justice, equality and human rights and for this reason, she does not approve her father’s attitudes towards the poor people.

He is Davut’s father who also works at the coalmine.