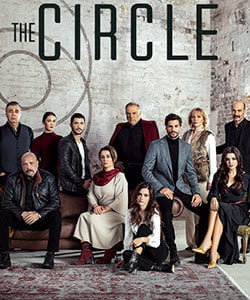 25 years later, the destiny of these two babies intersect again.

Cihangir (Serkan Cayoglu) is a brave young man who has been raised by Ilhan and does not know the fact about his past. He believes that he is the son of a big mafia leader Ilhan. Cihangir suffers from insomnia and gets psychological support. He works together with his so-called father and carries out legal and illegal business.

Kaan (Kaan Yildirim), on the other hand, is a young man who has been raised by Humeyra without knowing his own past. He believes that Humeyra is his biological mother and his father was killed by unknown assailants years ago. Even though he is innocent, Kaan has been in prison for 2 years due to robbery. He aims to disclose the slander against him and find the true culprit who committed a murder and sent him to prison.

Cihangir and Kaan are dragged into a game created by The Circle.

One day, a short video clip about a murder is sent to Istanbul Police Station. This video clip clearly shows how Humeyra’s husband Eren Karabulut was killed 25 years ago. The murder case that was closed 25 years ago is opened again and a few police officers are authorized to solve the case. Even though the faces of murderers are seen in the video clip, authorized police officers do not want to catch the murderers directly, instead they aim to catch all important people related to the criminal organization The Circle. As stated in the video clip, the police officers make a deal with prisoner Kaan. According to this deal, Kaan will get out of prison and work together with the police in order to fight against The Circle.

On the same day, Cihangir also gets a video clip from an unknown person. After watching this video clip, Cihangir learns about his biological father and how he was killed 25 years ago. He understands that he is in the middle of a big game and tries to figure out who is behind all these schemes.

Cihangir and Kaan start to fight against the Circle for different reasons but same goals. While struggling to dissolve their intermingled past, they find themselves on the same side. Meanwhile, Cihangir meets Mujde (Hande Ercel) who is the daughter of a famous criminal. Kaan, on the other hand, meets Bahar (Hazal Subasi) who is a successful cop in charge of Kaan’s case. All four of them fall into the circle of love and none of them can escape from The Circle.