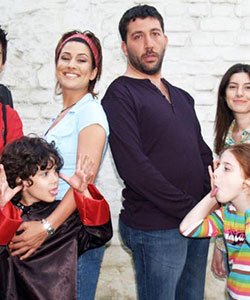 Out of pure coincidence, different lives of these two persons intersect. Ferit (Oner Erkan) who lives in a big house in Istanbul has no choice but to sell the house which belongs to his father in order to pay his gambling debt. He uses his father’s signature and sells the house to both Eda and Oguz at the same day.

Without knowing this fact, Eda and Oguz finalize their preparations and dream to live happily in their new houses. They move in to their new houses at the same day and realize that they are both deceived by Ferit.

Two families start to live at the same house without knowing each other. Oguz and his daughters settle into the upstairs while Eda and his sons settle into the downstairs. They have to share the kitchen area though. It will not be easy because Eda and Oguz fight like cats and dogs all the time, they are both stubborn and never take steps backward. At the same time, children quarrel generally and try to send the other side away.

In Two Families (Iki Aile) tv series story, you will watch a cozy family relations together with romance. Will Eda and Oguz find a solution for this chaos and eventually find Ferit? Who will get the house at the end? Will children get used to living together and start to live happily without any dispute?