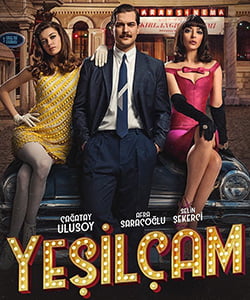 The story takes place in 1960s that is the golden age of Turkish cinema. Yesilcam (literally means The Green Pine in Turkish) refers to Turkish film industry that is similar to Hollywood in the U.S.

After losing his company, Semih immediately opens a new company named Buyuk Ates Film (literally means Big Fire Film in English). He aims to make a successful film as soon as possible in order to survive in Turkish film industry.

During 1960s, Turkish film industry is very competitive such that Turkey produces 250 to 350 films annually. For this reason, Semih finds it very challenging to be successful in this competitive environment.

Semih never loses his faith to be successful because he trusts his vision and passion for filmmaking. Thus, he starts over and tries to do his best in order to make a comeback after a major setback. However, nobody wants to work with a small film production company.

Out of pure coincidence, Semih comes across to his long-lasted friend Turgut who has just got out of the prison. He gets the film script about two sisters that his friend has recently written. He believes that his next movie based on this story could be a blockbuster.

Semih wants to persuade his ex-wife Mine (Selin Sekerci) to take part in his next movie. Event though they are divorced, they still have feelings towards each other and they still keep in touch. Mine is a popular actress who has a busy schedule. She is secretly dating with a married man Reha (Yetkin Dikinciler) who is Semih’s rival in the film industry.

Meanwhile, Semih’s business partner Hakan (Bora Akkas) bumps into a young and beautiful girl Tulin (Afra Saracoglu) who dreams to be a successful actress. He sees a starshine in Tulin’s eyes and understands that she has a potential to be become a rising star in a very short time.

When Semih meets Tulin in person, he decides to work with her in his new film project. He believes that he could make a successful film starring Mine and Tulin together. However, the arrival of Tulin changes all the things in Semih’s life.

Tulin is a 20 years old girl who wants to work with the people whom she can trust. She wants to be an actress and she does not search for a rich husband. She has been living together with her mother after her father passed away when she was a little girl.

Yesilcam (The Green Pine) tv series story is about an ambitious producer Semih Ates who aims to make a blockbuster film in order to survive in a very competitive film industry. Will Semih manage to become successful in his new film project? Will Tulin accept to work together with Semih? Will Semih manage to turn a small film production company into a well-known company? Will Izzet get closer to Tulin? Will Mine continue to have an affair with Reha or return to her ex-husband Semih?