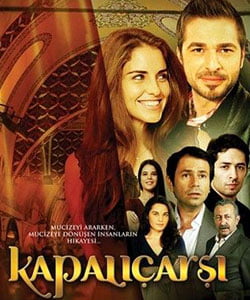 Cemal (Nejat Isler), Mahmut (Olgun Simsek), and Arda (Mert Firat) are close friends who live in the same house and work as a salesman in the famous Turkish Grand Bazaar. They have a lower middle-class life and want to be rich.

At first, she does not accept the offer of Cemal. But when her father wants her to marry one of their fellow citizens Mustafa (Tolga Tekin), she accepts the offer and escapes to Istanbul leaving everything behind.

Eventually, a profound love story begins in the Grand Bazaar. Diyar and Cemal draw closer but their story becomes more complicated when Mustafa follows Diyar to Istanbul. Mustafa still loves Diyar and wants to be with her again thus he tries every possible way to gain her hearth.

In grand bazaar (kapalicarsi) tv series story, you will explore the lives of ordinary people in famous Grand Bazaar. How will the lives of Cemal, Mahmut, and Arda change after the arrival of Diyar? Will Diyar and Cemal eventually confess their feelings? Will they finish the carpet and become rich?

You Might Also Like
Rain Season (Yagmur Zamani)
What is the Fault of Fatmagul? (Fatmagul’un Sucu Ne?)