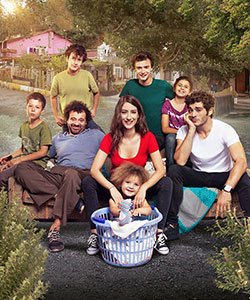 Filiz becomes both mother and father for her siblings after her mother left them long ago. Eldest son Rahmet (Yagizcan Konyali) is clever and does tutoring in order to support his family financially. Middle son Hikmet (Nejat Uygur) works at grocery store and secretly loves the wife of his boss.

10-year-old Fikret (Alp Akar) makes trouble at school all the time. Youngest daughter Kiraz (Zeynep Selimoglu) goes to primary school and tries to give assistance to her sister as much as possible. Toddler Ismet (Omer Sevgi) is so innocent and needs child-care of his sister.

Filiz has a difficult life and does not have any time or desire to have someone in her life. However, out of pure coincidence, she meets a young guy. With the persistence of her best friend Tulay (Nesrin Cavadzade), Filiz decides to go to the wedding ceremony of her neighbor. On her way, she is attacked and experiences pickpocketing. This accident lets Baris (Burak Deniz) enter into Filiz’s life.

Baris (Burak Deniz) is a handsome guy who helps Filiz and brings her stolen bag back. He is attracted by Filiz’s strong personality at first sight and decides not to leave her. Baris drives expensive cars and wears branded accessories. He seems to be too different than Filiz and her siblings. For this reason, Filiz does not want to see him again. However, Baris is determined to gain Filiz’s trust before gaining her heart.

In Our Story (Bizim Hikaye) tv series story, you will watch the difficult life of Filiz who takes care of her 5 siblings after her mother left them long ago. Will Filiz decide to do something good for herself and continue to see Baris? Is Baris rich or poor? Will Filiz and Baris have a normal life just like other couples? Will Filiz manage to take care of her siblings successfully?

Characters
Filiz (Hazal Kaya): Filiz is a young girl who takes care of her 5 siblings due to her mother’s absence. She dedicates her life to her family and works at low-skilled jobs. She is proud, headstrong, and tenderhearted.

Baris (Burak Deniz): Baris is a young man who mysteriously comes into Filiz’s life. He is clever and self-confident. He falls in love with Filiz at first sight and tries to do his best to gain her trust.

Fikri (Reha Ozcan): Fikri is a single father of 6 children. He is alcoholic and selfish. He spends much of his free time drinking and does not work to support his family financially.

Rahmet (Yagizcan Konyali): Rahmet goes to high school. He is clever and good at his classes. He does tutoring in order to support his family financially and uses his intelligence to earn money.

Tulay (Nesrin Cavadzade): Tulay is the best friend of Filiz. She lives in the same neighborhood and takes care of Filiz’s little brother when needed.