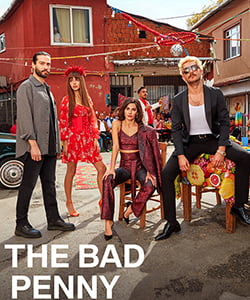 Efe (Ekin Koc) is an idealist police captain who works at organized crime branch in Istanbul. He is fearless, reckless and lawless. He does anything to arrest culprits and secure the justice.

Efe is very successful at work. He has been working to arrest a mafia leader Kartal (Uraz Kaygilaroglu) for the last 6 months but cannot find enough evidence to put him behind bars.

Kartal lives in a Romani neighborhood called Cingirakli. He is a gypsy crime boss who is responsible for protecting that neighborhood. He has night clubs, runs illegal casinos and operates online gambling websites.

Kartal is fearless and aims to make his business bigger. He not only takes attention of the police but also of other mafia leaders in Istanbul.

Even though Efe knows what kinds of illegal activities that Kartal engages in, he does not have enough evidence to arrest him.

Out of pure coincidence, a series of murders bring these two opposing characters together: a hardboiled police captain Efe and a gypsy crime boss Kartal.

When a series of murder is committed in Romani neighborhood, Efe and Kartal team up and work together to bring the killer to justice.

Kartal’s authority has been shaken by these murders. At first, he assumes that these murders are committed by his opponents. However, soon after, he is also attacked by a serial killer Irfan (Diren Polatogullari).

Irfan is a mysterious man who seems to be silent and introverted. He works as a saz player at traditional night clubs. He starts to commit murders in order to take his revenge. After each murder, he leaves three pennies at the murder scene.

The Bad Penny (Uc Kurus) tv series story is about a gypsy crime boss in a Romani neighborhood and an idealist police captain at organized crime branch. Will Efe eventually enough evidence to arrest Kartal? Will Efe and Kartal manage to work successfully and find the serial killer? Will Kartal make his business bigger? Will Kartal manage to protect the people in the Romani neighborhood?