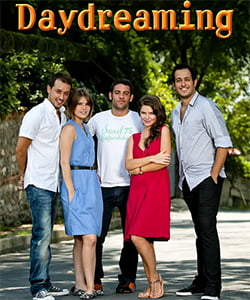 Asli (Pelin Karahan), Deniz (Ibrahim Kendirci) and Efe (Daghan Kulegec) are close friends and go to the same high school. Asli is an idealistic and forceful girl who wants to go to the university after high school although her family faces with some financial difficulties. She tries to be strong all the time but deep inside she loves Deniz and wants to be loved.

Deniz has a wealthy life and likes to be a film director. On the other hand, Efe has a relax personality and doesn’t care about anything. Even though they have different characters, they live happily in a small town but soon the arrival of a new girl, Mine (Asli Enver), changes everything forever.

Daydreaming (kavak yelleri) tv series story, you will explore four young people who eager to grow up with hurricanes inside. Additionally, you will see loves, failures, mistakes and friendships. How will the arrival of Mine affect the lives of Asli, Deniz, and Efe? Will they achieve their ultimate goal: pass the national university exam and get an university education? Will their friendship stand for all the rifts between them?