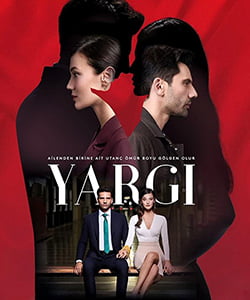 Ceylin (Pinar Deniz) is a successful lawyer who can do anything to achieve whatever she believes in. She is persistent and fearless. She does not know boundaries when it comes to rules.

Ceylin becomes the head of family while studying at law school. Her father is accused of robbery wrongfully and stays in the prison for 5 years. During this time, Ceylin does her best to support her mother and younger sister and learns how to fight against the harsh conditions of life by herself.

After then, Ceylin does her job according to her own rules. According to her, any mean or method is allowable in order to reach justice.

Ilgaz (Kaan Urgancioglu), on the other hand, is a successful prosecutor who does everything in accordance with the rules and regulations. In this respect, he has an opposite character compared to Ceylin.

Ilgaz has strict rules in his job and he does not tolerate with illegality and wrongfulness. However, he finds himself in a difficult situation and in conflict with his own work ethic when his younger brother Cinar (Arda Anarat) is accused of being a murderer.

The life of Cinar, as well as his family, turns upside down when a dead body is found in a container. Cinar is accused of being the principal culprit because a credit card belonging to his father is found in the same container.

It appears that Cinar has borrowed his father’s credit card and has lost it. Additionally, Cinar lies about being at home at the time of the murder. He claims that he was at home all night but it is discovered that he were outside between 1-3 pm. Furthermore, a white sweater with the victim’s blood on it is found in his father’s car.

Cinar becomes the principal culprit of this murder case. Both Ilgaz and his father are shocked by this unexpected event. They cannot know what to do, whom to trust, and how to restore their family pride.

The paths of Ceylin and Ilgaz cross with this murder case. Ilgaz needs to find a lawyer who can defend his brother while all arrows point to him. He wants to work with Ceylin because Ceylin can be the only lawyer who can save his brother with her fearless attitude.

Ceylin accepts to defend Cinar and starts to do her best to save him. While working for Cinar’s acquittal, she even counters with Ilgaz and Metin who want to do everything in accordance with the rules and regulations. However, Ceylin soon after finds out that her younger sister Inci (Ece Yuksel) is in fact the victim of this murder case.

Ceylin and Ilgaz find themselves in a mystery that affects both their families. They start to question family values and the concept of justice from different perspectives.

Judgement (Yargi) tv series story is about a murder case which brings a fearless lawyer Ceylin and rule-based prosecutor together. What will Ceylin do when she learns that her younger sister Inci is the victim of this murder case? What will Ilgaz do when he learns that his younger brother Cinar is the principal culprit of this murder case? Will Ceylin continue to work as a lawyer of Cinar? Will Ilgaz continue to trust his brother and do his best to save him? Will Ilgaz continue to do everything in accordance with the rules and regulations or will he be limitless and fearless as Ceylin?

He is a successful prosecutor who does everything in accordance with the rules and regulations. He is the source of pride in the family and is a respected prosecutor in his career. He adopts all the principles of his father and stays on the straight and narrow. He is cool, distant, meticulous and principled at his job while he is protective and warmhearted towards his family. He does not manage to keep a close relationship with his younger brother Cinar. When his brother is accused of a murder case, he does not bestow a privilege on him and tries to act objectively.

She is a successful lawyer who can do anything to achieve whatever she believes in. She is persistent and fearless. She does not know boundaries when it comes to rules. When she was studying at law school, her father went to prison unjustly. Ceylin has been affected by this event and become a successful lawyer. According to her, any mean or method is allowable in order to reach justice. She is so fond of her father Zafer and her sister Inci.

He is a prosecutor who works at the same place together with Ilgaz. He is passionate and arrogant. He is the brother of Neva who is Ilgaz’s ex –fiancée. He has been competing with Ilgaz since their school years. After Ilgaz and Neva break up, Pars gets angry at Ilgaz and starts to go badly with him.

He is an idealist police chief at homicide department. He is upfront, rule based, and respectable. He has a good relationship with his elder son Ilgaz whom he trust up to the end. However, he does not get along well with his younger son Cinar. After his wife passed away a couple of years ago, Metin starts to blame his son Cinar for the death of his wife.

He is a lawyer and a founder of a big law firm named Tilmen Hukuk. He is famous for cleaning up all dirty transactions of his client companies. He believes that any problem can be solved if enough money is paid. He does not get along well with his son Engin for a long time.

She is the mother of Ceylin. She is a housewife. She has a closer relationship with her eldest daughter Aylin.

He is the younger brother of Ilgaz. He becomes the principal culprit of the murder case as all the arrows point to him.

She is Ceylin’s younger sister. She becomes the victim of the murder case. 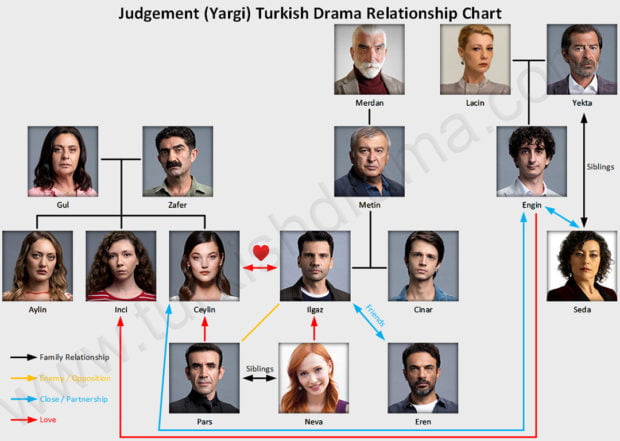