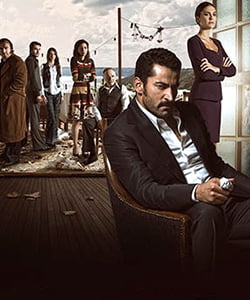 The story takes place during 1970s.

Therefore, Mahir gives up himself, his life, and his love. He makes a plan to work with the judges of his father’s trial. By this way, he aims to investigate the case in more detail and to find the true murderer. He creates a new identity and acquaints himself as Salih, who is a law apprentice.

Mahir starts to work with Feride (Berguzar Korel) who is the attorney general for Nazif Kara’s trial. Feride is a young and beautiful woman who comes from a rich family. She is so succesful on her work.

Mahir/Salih starts to give assistance to Feride while she is doing research about the murder. Mahir/Salih tries to give another perspective to Feride. He always wants to protect his father and for this reason, most of the time he expresses his positive views about Nazif Kara.

As time passes, Mahir/Salih and Feride fall completely into each other. However, Mahir/Salih knows that this is impossible love thus, he tries to hide his love.

In karadayi tv series, you will see the story of Mahir/Salih and Feride who love each other to death but their love is impossible. Will anybody recognise that Salih is actually Mahir in disguise? Will Mahir/Salih live the rest of his life peacefully with Feride? Will Mahir/Salih manage to find the true murderer and save his father?