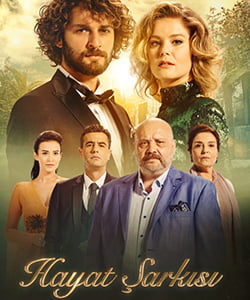 Bayram (Ahmet Mumtaz Taylan) comes to his hometown in order to make a peace with his close friend Salih. They agree to engage their children Melek and Kerim when they grow up to the age of marriage.

Years later, Kerim (Birkan Sokullu) graduates and gets his master’s degree in environmental studies. Even though he wants to live in Germany and works as an instructor at the university, he cannot persuade his father.

Kerim has nothing to do but to return to Istanbul because his father wants to keep his promise to his close friend.

Eventually, Kerim decides to get engaged to Melek (Ecem Ozkaya) and goes to his hometown in order to ask for Melek’s hand in marriage.

Meanwhile, Melek’s younger sister Hulya (Burcu Biricik) activates her plans that no one has taken into account before. She is a passionate girl and desires to get married to Kerim since she was a kid.

Therefore, Hulya can do the impossible to be with the person that she loves.

With the arrival of Kerim, Hulya makes a plan that would dishonor her sister. When everyone becomes skeptical about Melek’s chastity, Kerim breaks his word and gets engaged to Hulya instead of Melek.

Soon after, Kerim and Hulya get married. Immediately after they get married, Kerim leaves Hulya behind and goes to Germany in order to continue his ordinary life there. Due to his father, he makes a compulsory marriage but he does not want to have a real marriage with the woman that he has no feeling for.

However, Hulya is not an easygoing person who can accept whatever is offered to her. She goes to Germany as well and turns Kerim’s life upside-down.

In flames of desire (hayat sarkisi) tv series story, you will explore the life a passionate girl who does everything in order to reach her goal. Will Hulya manage to have a real marriage with Kerim? What will Kerim do when he learns every evil thing that Hulya has done before?