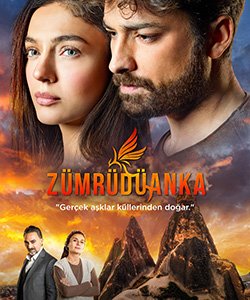 Zumrut and Serhat have been dating secretly and dream to get married after Serhat discharges from the military duty.

Zumrut is willing to wait for her lover but her marriage plan turns upside down when she learns that Serhat is killed on duty.

The bad news spread all over Cappadocia. Not only Demirkan family but also Zumrut mourn upon the death of Serhat.

Adil is a middle-aged man who is the boss of the factory where Zumrut works. He is attracted by Zumrut’s purity, beauty, and thoughtfulness.

Adil eventually finds the person whom he is willing to get married but he cannot win Zumrut’s heart no matter whatever he does.

Ulfet is a passionate woman who wants to get rid of poverty. Thus, she wants her daughter to get married to a wealthy man. When she learns that she could become in-laws with Demirkan family, she tries her best to persuade Zumrut for accepting the marriage proposal.

Ulfet uses every trick in the book to persuade her daughter. Eventually, she collaborates with her little daughter Meliha (Miray Akay) and makes a secret plan. According to their plan, Ulfet would force Meliha into marriage if Zumrut does not accept to get married to Adil Demirkan and Meliha would play for sympathy of her sister and would threaten them to kill herself. Their plan becomes successful and Zumrut accepts to get married in order to save her little sister.

Zumrut and Adil organize a wedding ceremony and accept the greetings. After they get married officially, they are shaken with a great surprise.

Serhat shows up at the wedding ceremony all of a sudden. Everybody is surprised because they assume him death. While everybody becomes happy to see him all alive, Zumrut feels a huge remorse for her wedding decision.

Zumruduanka (Phoenix) tv series story is about a beautiful girl Zumrut who gets married to a wealthy man Adil upon the death of her lover Serhat. Will Zumrut disregard her wedding decision when she learns that her lover Serhat is alive? Will Serhat learn the truth about this marriage and understand Zumrut’s decision? Will Zumrut and Serhat manage to tackle all the obstacles in front of their ways and retain their love to each other?