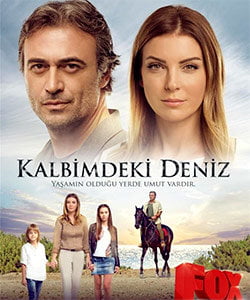 Deniz (Ozge Ozberk) has everything a woman can ask for: she has a wealthy life and lives happily with her two lovely children and a handsome husband. She has been raised without seeing any hardship. Therefore, she is well-intentioned all the time and trusts all the people around her.

After 3 days of Alihan’s disappearance, Deniz also loses all her wealth. Now, she has nothing and she finds herself in a desperate state with her two children and her father. The betrayal of her husband transforms Deniz’s life so radically that she will never be able to go back to the way she used to live.

Deniz moves into a new house in a poor neighborhood and tries to be strong in front of her children and her father. While struggling to settle in her new life, Deniz tries to do her best to help her children adapt their new lives. During her journey, Deniz meets Merit (Kutsi) who will be a lover and be a life saver.

In Deniz inside my heart (kalbimdeki deniz – second chance) tv series story, you will explore the story about a young woman who tries to adjust a new life after her husband’s disappearance. Will Deniz and her children get used to living in a small house in a new neighborhood? Will Deniz manage to stand on her own legs?