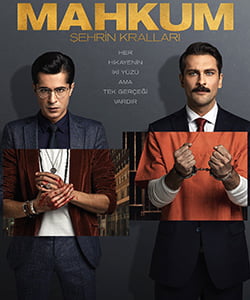 Firat (Onur Tuna) is a successful prosecutor and the head of the violent crimes investigative division. He is clever, stubborn, brave and fearless. He never loses a case.

Firat has a modest life together with his wife and his daughter. Even though he does not earn so much, he is satisfied with his job and he has a happy marriage. Firat’s modest life turns upside down when he takes a murder case of Savas.

Savas (Ismail Hacioglu) is the heir of a Yesari family. He is independent and irresponsible. He suffers from psychological problems due to the lovelessness of his father. He knows that his father considers him as a dishonor to the family.

Savas has an identical twin brother Baris (Ismail Hacioglu) who is the future owner of the family business. Unlike his brother, Baris is responsible, cautious, and obedient to his father.

Savas cannot manage to control his anger and cannot get through his psychological problems. He has got in trouble for a couple of times. He cannot stand the fact that his brother is perfect in all terms.

One of these moments of disappointment, Savas kills a woman at his home and escapes from the police. He thinks that he can get rid of this situation as if he has done before. However, this time, he has to pay the costs of his actions.

While hiding at one of his secret houses, Savas comes across his twin brother Baris. He understands that he cannot get away from this murder case easily. Therefore, he decides to kill his identical twin brother and take his identity. Thus, he throws his brother away from the balcony in order to make it look like a suicide. After then, he calls the police, reports the suicide of his brother, and acts as if he is Baris.

Savas takes his brother’s identity and starts to live as if he is Baris. He persuades everyone except a few people. Buge (Melike Ipek Yalova) who is the wife of Baris immediately understands that Savas is acting as if he is her husband but she cannot reveal this fact to anybody for the sake of her son.

Firat also does not believe that Savas has killed himself. Even though he has some feelings that Savas has changed his identity, he cannot prove this.

While trying to solve this murder case, Firat wakes up one day and finds himself a convict on a death row. He does not remember anything about the past 6 months of his life. He has no idea why he has been put in prison.

Firat suffers from temporary amnesia. While he is in prison, he learns that he is accused of killing his wife and his daughter. He cannot believe that he has done this to his beloved family.

Firat struggles to recover his memory and learn the truth about his family. He need to prove his innocence. Thus, he accepts to hire a young woman Cemre as her lawyer.

He is a successful prosecutor and head of the violent crimes investigative division. He never loses a case. He is married and has a daughter.

He is the identical twin of Baris. He is independent and irresponsible. He suffers from psychological problems due to lovelessness of his father. His father trusts Baris and considers Savas as a dishonor to the family. When he kills a woman and escapes from the police, he comes across his twin brother. After killing his twin brother, he takes his identity and starts to live as if he is Baris.

He is the identical twin of Savas. He is the future owner of the family business after his father. He is responsible, cautious, and obedient to his father. He is married to Buge and has a son. When his twin brother is accused of being a murderer, he tries to persuade him to surrender. However, his own brother Savas kills him. After he passes away, Savas takes his identity and starts to live as if he is Baris.

She is a defense lawyer who strives to be eloquent and rational, but loses in court every single time. She takes up Firat’s case even though it is a very difficult case. She wants to prove that she can manage to win a case.

She is the wife of Baris and she has a son. She used to date with Savas before she got married. Even though she loved Savas, she could not trust him. She immediately understands that Savas is acting as if he is Baris but she cannot reveal this fact to anybody for the sake of her son.

She supports Savas and does her best to keep his identity secret.