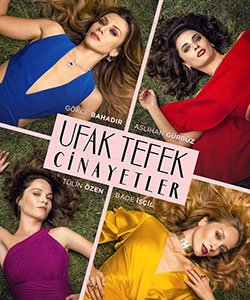 Oya (Gokce Bahadir) is a successful gynecologist who is passionate about her job. She is a middle aged beautiful woman who still could not recover from the trauma in her high school days.

Almost 20 years ago, Oya was betrayed by her three close friends: Merve, Pelin, and Arzu. On their school trip, Oya was left alone in the middle of the lake and could not get out of the water when she realized that her friends took her clothes. While she was calling for help, her friends executed their plan and called their school teacher Edip (Selim Bayraktar).

Edip came to rescue Oya from this desperate situation and gave her something to cover her body. At that time, all students misunderstood this situation and accused them of having a romantic relationship.

No matter what they did, Oya and teacher Edip could not prove their innocence and were expelled from the school. Betrayed by her friends and just broke up with her boyfriend, Oya found herself in a desperate situation and attempted to commit suicide. She survived from this attempt but she would never forget it throughout her life because she would never become a mother in the future.

20 years later, Oya comes across to her three friends who have caused this trauma in her life.

Merve (Aslihan Gurbuz) is now a mother of a 7 years old daughter. She is married to successful and handsome Serhan (Mert Firat) who works as an investment counsellor. She seems to have a perfect life in the most beautiful house of Sarmasik community.

Pelin (Bade Iscil), on the other hand, has a 7 years old son. She is married to Taylan (Ferit Aktug) who was the boyfriend of Oya during high school. In the absence of Oya, Pelin manages to attract Taylan whom she has been in love with for a long time.

Arzu (Tulin Ozen), on the other hand, is married to Mehmet (Yildiray Sahinler) and has two children. She seems to sacrifice her life for her family and retains her naïve personality.

Merve, Pelin, and Arzu have never got separated since high school and continue to live in Sarmasik community after getting married. Merve is still the leader of this group and continues to control other two.

Oya moves into a new apartment in Sarmasik community and starts to hang out with her old friends after 20 years. She pretends to forget everything in the past and seems to be strong. Her arrival changes the perfect lives of Merve, Pelin, and Arzu. This time, Oya is determined not to run away again.

Reunion of these four women leads to passion, jealousy, grudge, and eventually, a murder. The police superintendent starts to investigate the murder in Sarmasik community while brighten the shadows of the past.

In stiletto vendetta (ufak tefek cinayetler) tv series story, you will watch the lives of four women Oya, Merve, Pelin, and Arzu who seem to get along well but harbor passion, grudge, and envy to each other. Why Oya has returned to Sarmasik community after 20 years? Will Oya manage to forgive Merve, Pelin, and Arzu and continue to live in peace? Will Oya manage to recover from the trauma in her past or will she take her revenge? Will Merve continue to be the leader of this group? Who is murdered at the end?