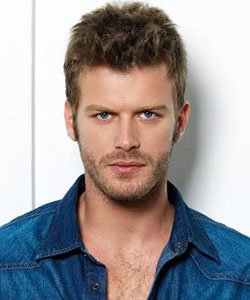 Profile
Name: Kivanc Tatlitug
Birthdate: October 27, 1983
Birthplace: Adana, Turkey
Height: 187 cm
Eye Color: Blue
Hair Color: Dark Yellow
Education: Yenice Ozel Cag High School
Ajans: Gaye Sokmen Ajans
Spouse: Basak Dizer (m. 2016-present)
Biography: Kivanc Tatlitug was born in 27 October 1983 in Ankara. He has 5 siblings. He moved to Istanbul with his family in 1997. Before starting his acting career, he played basketball professionally. He played basketball in well-known clubs as Ulkerspor (for 2 years), Besiktas (for 1 year) and Fenerbahce (for 1 year). When he got injured, he had to leave his sport career behind. After then, he started to work as a model. He became the “Best Model of Turkey” in 2002 and “Best Model of the World” in 2002. He lived in Paris for 1.5 years and worked as a model there. He started his acting career with his role Mehmet in popular Turkish drama Silver (Gumus) and became very popular not only in Turkey but also in the world.