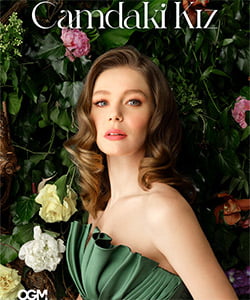 Nalan (Burcu Biricik) is a beautiful young girl who is the only child of Ipekoglu family. She is a naïve, graceful, kind, and innocent girl who is 25 years old. She has been raised without love and tender in a big house along the Bosporus. Her mother Feride (Nur Surer) is a control freak.

Feride controls everything about Nalan, even her weight. She does not want her to gain weight above 53 kilograms. She cares about family honor to death. Thus, she does not let Nalan go outside at night and date with a man before getting married. She has a harsh attitude towards Nalan and never shows compassion and understanding towards her. She has never forgiven Nalan due to the fact that she is the baby for killing her mother while coming into the world.

Nalan is an obedient girl who never argues with her mother. She wears a tight corset, answers phone calls whenever her mother calls, never dates with a man, and never goes outside in the evening. She works as an interior architect at Koroglu company.

Koroglu family is a well-known family who owns hotel chains across the country. The father Rafet Koroglu (Tamer Levent) is a successful businessman who has been raised in poverty and has achieved everything in life with his own effort. He has an eye on all the family’s spending and controls whether family members obey his rules or not.

The heir of Koroglu family is Sedat (Feyyaz Serifoglu) who is a young and handsome man. Sedat is 30 years old and he is the eldest son in the family. He has two other brothers named Levent (Tugrul Tulek) and Muzo (Enis Arikan).

Out of pure coincidence, the lives of Nalan and Sedat intersect. Since they work at the same company, they come across to each other for the first time at the company’s cafeteria. This encounter starts a new pathway for both of them.

When Rafet wants her son Sedat to get married to a nice girl, Nalan appears to be a perfect bride for the family. Sedat has an undignified affair with a married middle-aged woman Cana (Hande Ataizi). He does not want to end his relationship with her but at the same time, he does not have courage to object to his father.

Sedat has nothing to do but to do whatever his father approves. He approaches Nalan while continuing his secret affair. Eventually, he gets recognition of his father for finding a perfect bride for the family. On the other hand, Nalan thinks that she is in the middle of a fairytale.

Chrysalis (Camdaki Kiz) tv series story is about an innocent girl Nalan who has been raised without love and compassion due to her mother’s conservative and obsessive behavior. Will Nalan accept to get married to Sedat? Will Feride approve the marriage of Nalan and Sedat? Will Sedat end his relationship with a married woman after seeing Nalan? Will Nalan eventually find peace in life? Will Nalan and Sedat fall in love with each other?

She is a beautiful young girl who is naïve, graceful, and kind. She is 25 years old. She is like a princess who has been raised within glass. While she was a little child, she took piano lessons, as well as, lessons to learn how to act, dress, and speak like a lady.

The first child of the Koroglu family. He is 30 years old young man who is handsome and popular in the celebrity world. Like his mother, he is also keen on luxury spending. He buys luxury sports cars and expensive watches secretly from his father and keeps them in a hidden garage. Sedat knows that he has not fulfilled his father’s expectations. For this reason, he feels that he is an unimportant person. His mother’s love and tender does not help him. Sedat want to prove himself and make his own decisions independently.

He is a successful businessman who owns hotels across the country. He has been raised in poverty and has achieved everything in life with his own effort. He starts working when he was 11 years old to support his bedfast mother and his 7 siblings. For this reason, he knows the importance of money. Even though he is so rich, he does not like food waste and luxury spending. He controls whether his family has been making unnecessary spending and obeying his rules for the house.

She is the wife of Rafet Koroglu and the mother of Sedat. She is keen on luxury spending and her first son Sedat. In order not to argue with her husband, Gulcihan secretly buys luxury clothes and keeps them in a hidden closet in the house. She wears simple clothes at home but wears her luxury clothes while going to high society meetings.

She is the wife of Adil and the grandmother of Nalan. She is 70 years old. After her daughter passed away while giving birth, she has raised her granddaughter as her own child. Feride suffers from some physiological problems after the death of her daughter. She is afraid of being humiliated in front of public. Thus, she gives so much importance to family honor. She is the most dominant person in the family. She controls each step of Nalan and does not let her date with a man before getting married.

He is the husband of Feride and the grandfather of Nalan. He is a retired governor. He is silent, easy going, and respectful.

He is the son of Rafet and Gulcihan. He is married to Selen.

She is Levent’s wife. She gets along well with her mother-in-law Gulcihan.

He is the son of Rafet and Gulcihan. He suffers from hunchback. Thus, he spends most of his time in his room and he never appears at family photo.

He is the servant at the Koroglu family. He has been raised in an orphanage. He controls everything at the house (such as electricity and gas usage). He even searches house garbage in order to understand whether the members of Koroglu family waste anything. Tako becomes the eyes and ears of Rafet Koroglu at the house and gathers all information.

She is a housemaid at Nalan’s family.

She is a housemaid at Sedat’s family. 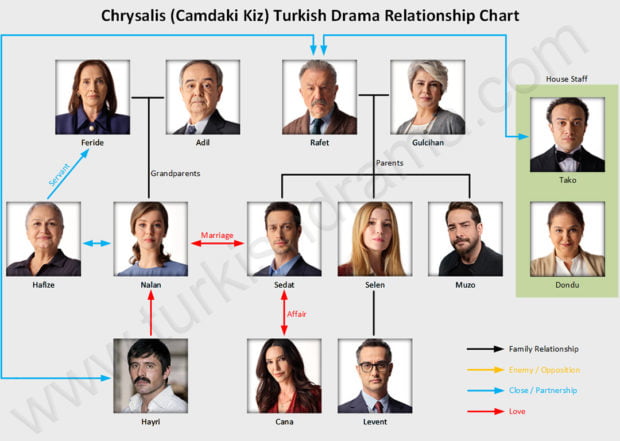