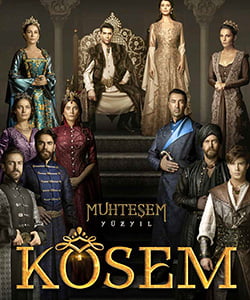 Ahmed is an Ottoman Prince who has grown up with a fear of death since his childhood. He saw the coffins of his uncles (19 coffins) when his father acceded to the throne and innocently promised his brother that they would never kill each other if they ever become Ottoman Sultan. However, Ahmed’s elder brother was killed on the order of his father, fearing a coup d’etat to dethrone him. Thus, Ahmed became so weak and introvert throughout his life.

Sultan Ahmed and Anastasia start to have feelings for each other. Even though Anastasia swears that she would return to her homeland at all costs, she cannot leave Sultan Ahmed behind.

Anastasia takes in the name Kosem (leader, Pioneer) and starts to be passionate about becoming a powerful ruler in the world of men. First, she loses her innocence and then, loses everyone that she loves.

In magnificent century kosem (muhtesem yuzyil kosem) tv series story, you will explore passion, love, jealousy, controversy, intrigue, power struggles and secrets revolving around Ottoman Palace while going to the enchanting world of Ottoman Empire. Will Anastasia/Kosem manage to become the most powerful woman in the Ottoman history? Will Anastasia/Kosem rise through the ranks of the harem? Will Sultan Ahmed manage to become a strong Sultan and keep his promise that he would never kill his brother?