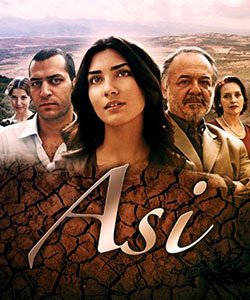 In this story, you will explore an impossible love of two proud persons and the bourgeoisie that changes hands. Will the secret buried in these lands make the strong feelings of Asi and Demir impossible? Will Asi and Demir manage to restrain their love? Will the past be forgotten?

Asi (Tuba Buyukustun) is a young and beautiful girl who lives in a big farm in Antakya together with her family. Even though her full name is Asiye, everybody calls her Asi meaning “rebellious”. This is because; she is so stubborn, determined, and prideful unlike the girls on her age.

Asi is a veterinary and works at the farm together with her father Ihsan Kozcuoglu (Cerin Tekindor). She and her father try to overcome the financial burden and for this reason, put extra effort to get productive harvest. Asi is totally different from her three sisters. While her sisters spend most of their time at home, Asi works closely with farm personnel and does different works such as fertilizing the agricultural products, buying animal feed or assisting cow birth.

Demir (Murat Yildirim), on the other hand, is a successful businessman who lives in Istanbul. He heads back to his hometown Antakya with his close friend Kerim (Cemal Hunal) after 20 years. In Antakya, Demir starts to remember his childhood memories one by one. He remembers the death of his mother who drowned herself in the river after losing her job.

As a successful businessman, Demir wants to make an investment in Antakya. Together with his friend, he searches lands and farms for sale. In the meantime, he finds out that the Kozcuoglu family allegedly drove his mother to commit suicide. Kozcuoglu family owns a prominent farm in Antakya for three generations. The owner Ihsan Kozcuoglu and his daughter Asi do their best to keep their farm alive.

Out of pure coincidence, Demir and Asi meet and they are immediately attracted from each other. Demir saves Asi’s life while she is about to drown at the river. He thinks that Asi is one of the workers at the farm. However, soon after he realizes that Asi is the daughter of his enemy, the Kozcuoglu family who is responsible for the death of his mother.

Demir decides to move his business to Antakya and wants to take his revenge from Kozcuoglu family. He buys the farm next to Kozcuoglu farm and starts to execute his plan. Demir’s aunt Suheyla (Tulay Gunal) and his sister Melek move into Antakya too. The story becomes more complicated when Asi starts to work at Demir’s farm in order to repay her father’s debt and Asi’s sister Defne (Selma Ergec) starts to have romantic relationship with Kerim.

As story develops, Demir falls in love with Asi even though she is the daughter of his enemy. He tries to keep away from her but he finds it so difficult to resist his strong feelings.

In Asi tv series story, you will watch an impossible love of two proud persons. Will Demir take his revenge from Kozcuoglu family or decide to forget about his past? Will Demir continue to love Asi even though she is the daughter of his enemy? Will Asi and Demir manage to restrain their strong feelings?