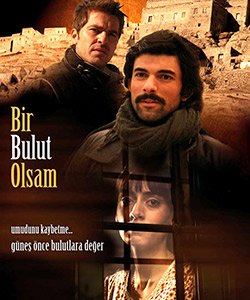 Dr. Serdar (Engin Altan Duzyatan), who has worked in the health programs of the UN in the hot spots of the world for ten years, comes to Guzelyurt, a border village that is located in a mined area. He starts to work as doctor in this village at the same time tries to clean the mined area with volunteers.

Dr. Serdar and his mother find out the tragedy Narin is facing and endeavor to save her from the torture she is experiencing. However, it will be very hard to convince Mustafa who loves Narin with a sick passion. Additionally, the story will be more complicated when Serdar and Narin draw closer.

In beyond the clouds (bir bulut olsam) tv series story, you will explore how the the life of fragile girl changes after being given the kiss of chance? Will Mustafa let Narin go? Will Serdar and Narin come together eventually?

Beyond the Clouds Turkish Drama Gallery